Fetus in Fetu is a rare abnormality where a mass of tissue which resembles a fetus is formed inside the body. This abnormality is very rare and is estimated to occur in 1 in 500,000 births.

A fetus is usually alive and lives like a parasite inside the person whom it lies.

The fetus forms an umbilical cord using which it sucks blood from the parent body.

As the fetus grows, it keeps feeding itself and the parent body starts experiencing problems.

There are very few cases of this bizarre abnormality found to date. In most of the cases, this happens when a twin absorbs the other twin inside the womb.

The absorbed twin continues to grow just like a tumour. 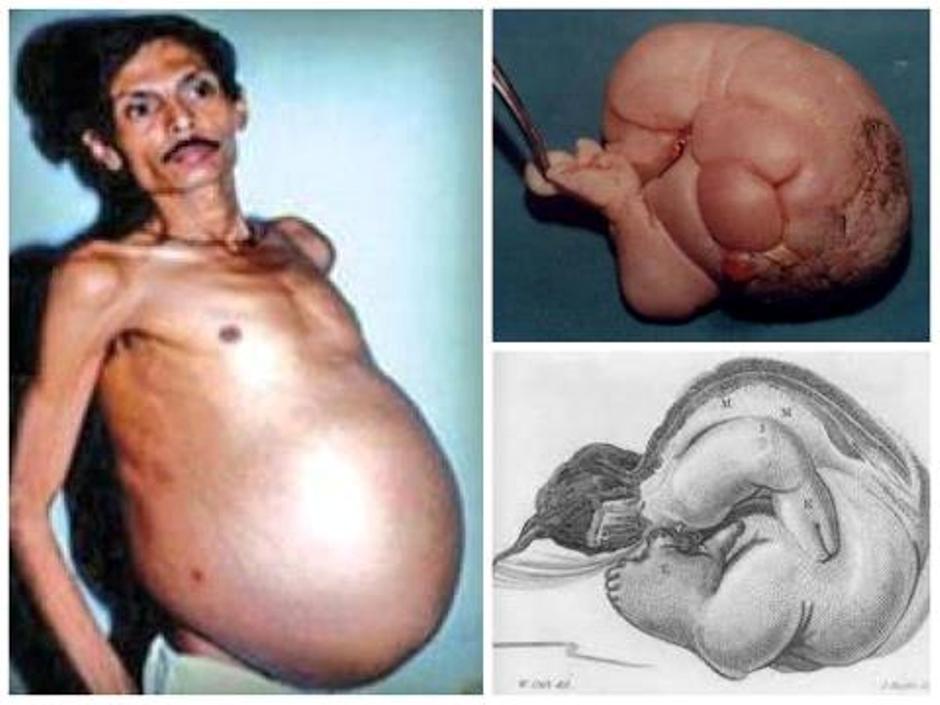 The most popular case of Fetus in Fetu comes from India.

Sanju Bhagat, a 36-year-old farmer from Nagpur, India knew that there is something strange growing inside his belly. People laughed at Sanju Bhagat and often called him The Pregnant Man.

The fetus had grown to an extent where Sanju was not able to breathe or eat.

He was rushed to the Tata Memorial Hospital and Dr. Ajay Mehta wanted to remove the “tumor”.

While operating, the Doctors were shocked to see what’s inside.

The Doctors felt as of they are actually touching a baby. It had bones, hair, and limbs.

It was discovered that this was a rare case of fetus in fetu where Sanju Bhagat had his twin brother growing inside him for 36 long years.

Bhagat now lives a healthy life after the removal of the fetus. 45-year-old Jenny Kavanagh had just moved from London to Cyprus when she started having medical issues.

Jenny’s problems started when she started getting heavy periods quite often.

Initially, Jenny thought that a contraceptive coil might be causing these issues but she was shocked to find the truth.

After an Ultrasound, the Doctors found 10 centimeters mass growing inside Jenny’s left ovary. The mass had to be removed immediately to avoid further serious problems.

During the surgery, the doctors were shocked to find that the mass had an eye, hair and a tooth.

Jenny Kavanagh is happy to be alive after the surgery and now lives a healthy life.

This case was reported from Hong Kong, where a Chinese baby was born with twins inside her at the time of her birth.

The Mother was pregnant with a triplet inside her but it the newborn baby had interred her siblings inside her body.

The newborn baby had to undergo a surgery after 3 weeks which included the removal of the 2 fetuses.

After removal, it was seen that each of the two fetuses had 4 limbs, a spine, rib cage, intestines, and anus, but were different in weight.

Till date, about 200 cases of Fetus-in-Fetu have been reported and the condition arises when a twin is absorbed by another inside the womb.

While many Doctors claim that such cases are usually due to one twin absorbing the other, some Doctors have referred this to a condition called Teratoma.

Teratoma is a tumor caused inside the body. The strange thing about this tumor is that it has hair, bones, tissue, and muscle.

Teratomas are found in babies, children, and adults.

A lot of Teratomas are found in female ovaries and hence the percentage of women having this is more.

Exercises For Bigger Butt: Best 7 Booty Workouts For You