Puberty is defined as the process of physical characteristic changes that occur and in turn mature a child’s body into an adult, capable of sexual reproduction, and enabling fertilization. Initiated by hormone signals from the brain to the gonads, this process can vary from individual to individual by age, gender, and other parameters. This page intends to give accurate information regarding the average puberty occurrences within males and females, including information such as the first ejaculation in males and the first period in females. 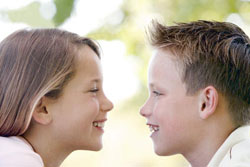 The onset of Male Puberty varies slightly within young males but typically occurs at an average age. This event is usually characterized by the First Ejaculation of the individual. The table below illustrates the Average Age of Puberty in boys:

It has been observed over time that the average age of puberty in boys has gone from roughly 16 years old, down to the 13 years old we have today. This is likely due to chemicals and hormones present in modern-day fast foods and nutrition sources.

Body hair is largely sensitive to varying levels of the hormone testosterone. Rising levels of this androgen during puberty cause ‘vellus’ (thin, barely visible hairs) to turn into ‘terminal’ (much more visible) hair all over the body. There is definitely a large difference in terminal hairs across the body when comparing men to women; as such it can be stated that males tend to have more terminal hairs than females.

A change in testicular size is typically one of the first physical signs of puberty in boys. From birth to the onset of puberty the testicles grow to a very minor degree and are typically on average the size illustrated as follows.

Upon the onset of puberty, the size of testicles changes drastically and typically results in a testicular volume as illustrated.

This website focuses on information that can improve overall health & wellness. Our writers have years of experience in the health and beauty niche. Every article is fully researched and is backed up by scientific studies and proof. Read More...